China and Solomon Islands have built diplomatic relations for one year. The two sides have carried out exchanges and cooperation in various fields and achieved fruitful outcomes. The Embassy of the People’s Republic of China in Solomon Islands held an opening ceremony on September 21, launching a new chapter in the relations between the two countries.

At the same time, the development of the bilateral relationship has received pressure from both inside and outside Solomon Islands. Recently, the Global Times (GT) reporter Shan Jie interviewed Li Ming (Li), Chinese Ambassador to Solomon Islands, to talk about his observations and feelings in promoting China-Solomon Islands relations.

1. GT: It has been a full year since China and Solomon Islands established diplomatic relations. How would you rate the progress of the relationship in the past one year?

Li: China and Solomon Islands established the diplomatic relations on September 21, 2019. I would like to use three phrases to describe China-Solomon Islands relations over the past year – a stable start, a smooth progress, and rapid development.

First of all, the establishment of diplomatic relations between China and Solomon Islands was approved by Solomon Islands parties and the cabinet, and supported by local people. Therefore, the two sides have a solid foundation.

Only 18 days after the establishment of diplomatic relations, Hon. Prime Minister Manasseh Sogavare paid a successful visit to China and was warmly welcomed by Chinese President Xi Jinping. Both sides reached important consensus on the development of China-Solomon Islands relations and signed documents of cooperation on Belt and Road Initiative (BRI), economic and technical cooperation, education, tourism, and sub-national cooperation, and achieved a smooth progress.

In the past year, our two sides have spared no effort to implement the consensus reached by our leaders, and cooperation in the above-mentioned fields has continuously achieved fruitful outcomes. China has been actively supporting the economic and social development of Solomon Islands, particularly in areas of infrastructure and improvement of the living standard of Solomon Islands people.

As the first Chinese ambassador to Solomon Islands, I was warmly welcomed by its government and people. Not long ago, we held the ceremony of the Official Opening of the Embassy of the People’s Republic of China in Solomon Islands. My colleagues and I will work hard with people in Solomon Islands to strengthen political mutual trust, deepen mutually beneficial cooperation, and promote stable and long-term relations. 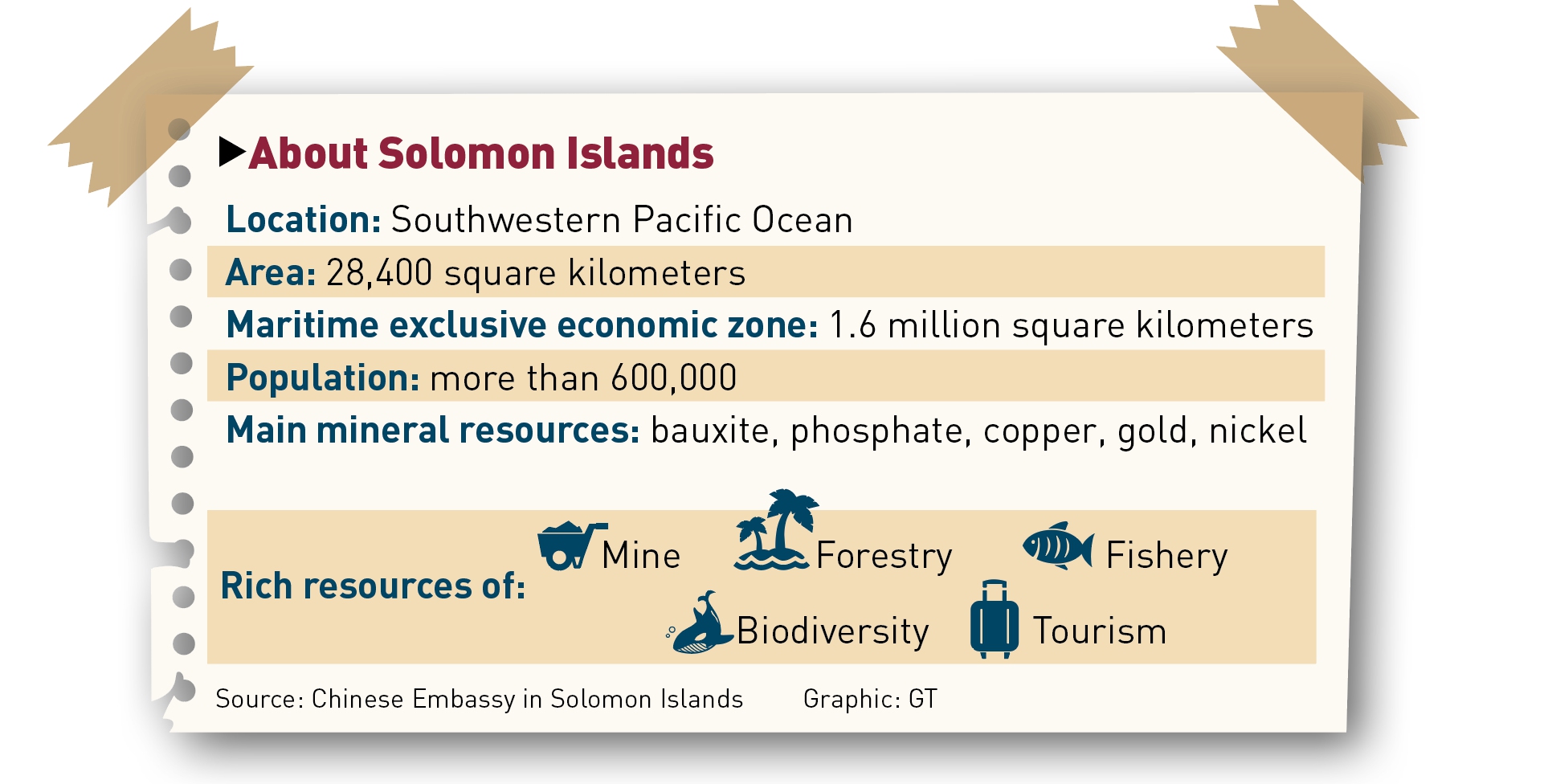 2. GT: What are the highlights of the current cooperation between the two countries? What benefits can the Belt and Road Initiative (BRI) bring to Solomon Islands?

Li: The two countries signed Memorandum of Understanding on BRI last year. Although Solomon Islands is rich in natural resources, its development is still far from reaching its full potential, which means the country needs to transform its resource advantages into the development advantage.

The BRI suits our development strategy and direction, especially in terms of infrastructure construction. Until now, some Chinese companies have come to start investment and business cooperation.

Solomon Islands has another feature. It has 992 islands in total, which means infrastructure construction is particularly needed. The BRI will provide an important opportunity for the development of the Solomon Islands.

3. GT: What is the situation of overseas Chinese and Chinese companies in the Solomon Islands?

Li: There are a few thousand Chinese citizens and overseas Chinese in Solomon Islands. At the beginning of the last century, Chinese arrived in Solomon Islands traversing vast Pacific Ocean and made important contributions to the economic construction and social development of this country. They have now closely integrated into the local society of Solomon Islands.

There are currently about a dozen Chinese companies in Solomon Islands, most of which were here before the establishment of diplomatic relations. They were engaged in infrastructure, minerals, tourism and forestry and received warmly welcome by the locals. The government and people of Solomon Islands appreciate the work of Chinese enterprises and the social and economic benefits they made for the locals.

I believe that there will be more Chinese companies coming to Solomon Islands to look for opportunities. The Chinese government also encourages qualified and reputable companies to visit this country.

4. GT: At the beginning of September, 104 people including you and other embassy employees arrived in Solomon Islands from Guangzhou, South China’s Guangdong Province on a Solomon Airlines’ charter flight. In the context of the global pandemic, this special flight must have risen past many challenges. How was this realized?

Li: COVID-19 pandemic prevention is an important area of cooperation since the establishment of diplomatic relations between China and Solomon Islands. Both countries supported each other in the fight against COVID-19.

Regarding our charter flight to Solomon Islands, the two sides conducted close cooperation. Our charter flight brought personnel of the Chinese embassy, experts and engineers to build the stadium for Pacific Games 2023, as well as additional medical supplies. The flight is a firm commitment to China-Solomon Islands relations and was warmly welcomed by the government and people of this country.

5. GT: In the process of establishing diplomatic relations, cooperating and fighting the epidemic together with Solomon Islands, have you encountered resistance from both inside and outside of the country? How do you deal with it?

Li: The establishment of diplomatic relations between China and Solomon Islands is based on the one-China principle and is the correct choice made by the two countries as independent sovereign countries.

Since the establishment of diplomatic relations, the two sides have been conducting close exchanges and cooperation. It is believed that with the joint efforts of the two sides, we will prove through concrete actions and the achievements of bilateral relations that the establishment of diplomatic ties between our two countries is the common aspirations of the two peoples and is the trend with the times. No one or not any force can stop it.

Of course, the time period of establishment of diplomatic relations between the two countries has not been long, and our mutual understanding needs to be further deepened, which is also an important task for the Chinese embassy.

We call for the promotion of high-level and all-level exchanges between the two countries, and constantly enhance mutual understanding and cognition between the two sides. This will further consolidate and develop bilateral relations.

In developing relations with Solomon Islands, we have always upheld the concept of true affinity and sincerity and the correct concept of justice and interests, treated countries equally, respected each other, did not impose our unilateral will on others, and did not interfere in the internal affairs of other countries. I think this is an important principle and foundation for China to establish diplomatic relations and develop bilateral relations with all countries, including Solomon Islands.

7. GT: The COVID-19 pandemic has greatly impacted the international social structure and geopolitics. What do you think of the relationship between China and Pacific island countries in the post-pandemic era?

Li: The relationship between China and Pacific island countries is currently in the best period in history.

In the post-pandemic era, China will focus on the urgent needs of island countries to normalize the epidemic prevention and control, as well as economic and social recovery, and continue to support island countries to develop their economies, improve people’s livelihoods, and strengthen cooperation in various areas.

Under the framework of the BRI, expand economic investment, cooperation in infrastructure, farmer fisheries, energy resources and other fields. In particular, China’s economic growth in the second quarter of this year recovered to 3.2 percent, and China has now become the world’s first major economy to resume positive growth. I think this fully reflects the strong resilience and vitality of China’s economic development, which will inject impetus and confidence into the global economic development. This will also provide important opportunities for the development of Pacific island countries. China and island countries have always been good friends and good brothers. I believe that in the new era, China’s relations with Pacific island countries will continue to make new greater achievements.