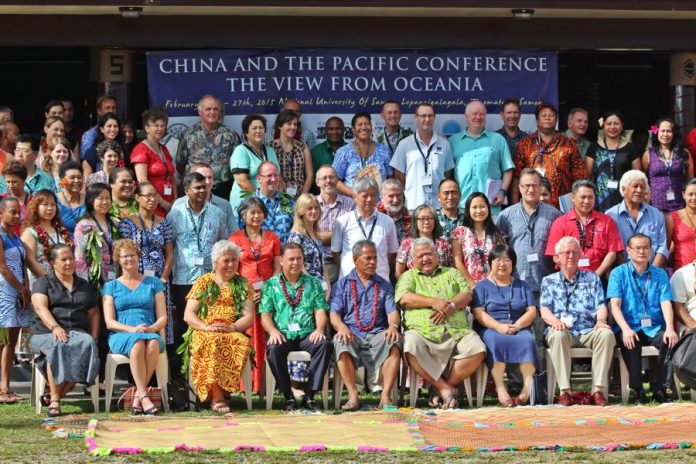 Opening Address of Prime Minister, Susuga Tuilaepa Lupesoliai Sailele Malielegaoi,
for the Opening of the Conference on China and the Pacific: “The View from Oceania“,
9:30am, Wednesday, 25 February 2015, National University of Samoa Campus.

Thank you for inviting me to the opening of your conference and I would like to warmly welcome all our overseas visitors to Samoa.

There is little doubt of China’s present strong and increasing influence in the Pacific.  The capacity of China’s demonstrated economic power, if not quite yet its growing military might, to further project this influence would seem to warrant your conference’s dedicated examination of the implications for the Pacific.

The singling out however of a country and its motives sometimes creates an implicit impression that all is not quite what it seems and there are conspiracies afoot.  It is a sentiment that would easily attend discussions of ‘what China wants’ with its growing strength, the ubiquity of its diaspora and not least the often relentless pursuit by the media of perceptions of China’s levels of assertiveness in promoting and securing its interests.  It will not be a surprise if the mere holding of your conference has generated these kinds of sentiments already.

Fortunately, I note from the programme the impressive scholarly credentials and practical expertise of the many presenters and the balance they bring to the treatment of the conference’s topic.  This objectivity is clearly very important to the exchanges and outcomes of your conference to help inform the policy makers not just in Beijing and in the Oceania capitals but in those of all the international actors from outside the region presently active or intending to be so in the Pacific.  The extent of knowledge available in your conference should ensure in-depth assessment of China’s Pacific expectations and vice-versa of the Pacific’s expectations of China.

We read and hear of the views of analysts and observers that point to colliding interests and inevitable rivalry between a rising China and the United States not to mention the other international players with the worrying prospects of confrontation and even conflict.  It would be most interesting to receive the objective scholarly and expert examination that your conference will bring to bear on such gloomy forecasts particularly in the context of the economic and physical security of the Pacific.

In terms of the conference’s stated topic, Samoa’s own contact with China dates back to the Chinese labour migrants in the early part of the last century.  You will hear later of the experiences and immense contribution that the early migrants and their descendents as well as the more recent migrants from China have made to the life of our country.  Presentations on Samoa’s very important economic partnership and commercial arrangements with China are also included on the programme.

I wish only to add very briefly in connection with the economic partnership that right from the start, Samoa sought China’s support in areas that other traditional donors were not engaged in, but we considered vital to Samoa’s development aspirations and nation building.  Through effective internal coordination, a very high level of complementarity was achieved between the separate contributions China and other development partners generously made available to assist Samoa’s overall development.

The official diplomatic relations between Samoa and China were established forty years ago in 1975.  The relationship started very modestly and I can say that the decision by Samoa’s leadership at the time was made without any expectations of what the future might be like.  The decision obviously did not feature very much the contrasting existing political ideologies of the time.  If anything, the decision had more to do with our Chinese migrants originating from Canton and was the China that Samoa knew!

In any event, although for many years Samoa’s relationship with China grew only incrementally, we nevertheless recognized and appreciated very much what to us was clearly a very genuine effort by Beijing in that earlier period to deepen the relationship.  The leaps and bounds since is a much more recent phenomenon that paralleled China’s own growing economic strength.

Besides the partnership supporting Samoa’s development aspirations, the intervening years were marked with high level visits of China’s leadership that included the early visit of General Secretary Hu Yaobang soon after the start of formal relations, the visit of Vice Premier Zhu Rongji just prior to becoming Premier, Chairman Jia Quinglin and members of the Standing Committee of the Politburo Mr Changchun Li and Mr. Wu Guanzheng.  Samoa’s leadership including our successive Heads of State and Prime ministers visited China and met China’s leadership in Beijing from the time of Deng Xiaoping’s Presidency.

In my own visits to China made over several years before and after I became Prime Minister, I noticed each time I visited, new additional and large areas of China planted with trees and greenery, even around the road from Beijing’s airport to the city.  It was evidence to see and reinforced the announced efforts of China to address the global issue of Climate Change close to the hearts of all our Pacific countries.  The joint announcement late last year by President Xi Jinping and President Barack Obama on the respective actions post-2030 of their countries on climate change meant a great deal to the Pacific as it would also be globally.

Samoa from the beginning of official recognition of China adhered to the One China Policy and found comforting that the interactions between the two countries have always been characterized by mutual respect for sovereignty, integrity and close friendship.  These principles in my view were again very well reflected in President Xi Jinping’s thematic presentation for the ‘establishment of a strategic partnership of mutual respect and common development’ made to Pacific leaders attending the Summit meeting in Nadi in November last year.

Finally, whether accepted or protested, the reality is that geographic size, wealth and military might do count.  When all three come together in very large amounts for any nation, everyone else sits up and takes notice with a flurry of projections of new opportunities but also assessments of threat level perceptions.

Right now, the omens for global peace and security are not auspicious with persistent warfare in Eastern Europe and the Middle East, the deadly spread of rampaging Islamists rejecting any secular order, and the corrosive effect of festering hot spots of resentment around the world.

The Pacific by comparison, and I would like to think by a ‘very long shot’, is still an ‘Ocean of Tranquility’.

The enduring hope is that for everyone involved and with interests in the Pacific, the ‘catch phrase’ must not be about rivalries and confrontations.  Instead the narrative should be about care for the Pacific, the creation of opportunities, common development and mutual respect.  The serious and committed application of wise and like minds to these principles should not just benefit all but simultaneously as well.

I look forward to the discourse and examinations of your conference’s vital topic.

In closing I thank the Victoria University of Wellington, the SunYat-sen University of Guangzhou, the National University of Samoa and convener Mr. Michael Powles for organising this important conference which with great pleasure I declare officially open. 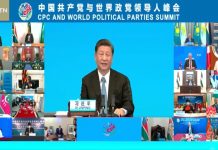 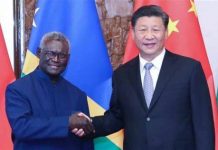 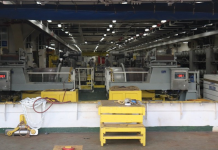